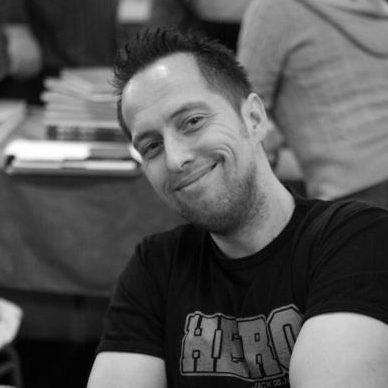 Romano Molenaar is a Dutch comic artist, best known as the second artist of the popular sci-fi series ‘Storm’. He has also worked extensively for US comic books and gaming projects. Born in The Hague, Molenaar has drawn covers and interior art for US comic books since the mid 1990s, starting with the Liar Comics miniseries ‘More than Mortal’ and ‘Witchfinder’. He then joined Chaos Comics, where his credits include ‘Lady Death’ and ‘The Tenth’. He also worked for Top Cow, doing fill-ins on ‘Witchblade’ and ‘The Darkness’, as well as the miniseries ‘Cursed’. In 2003 he was given the chance to work on an X-men title for Marvel Comics called X-men unlimited. The comic was about animal cruelty and won the Genesis award.
In 2012 he got hired for Dc comics to be part of the batman group. He illustrated Batman Detective comics #1 and got a job as regular penciller for the Birds of Prey series.

Molenaar was also asked by publisher Rob van Bavel to take over the popular Dutch comic series ‘Storm’, following the death of the original artist Don Lawrence in 2003. Molenaar gave up his day job and has done the artwork for new stories in cooperation with colorist Jorg De Vos since 2006. The stories, written by Martin Lodewijk and later by De Vos, are first published in Eppo magazine and then in albums by Van Bavel’s Don Lawrence Collection. In 2013, Molenaar also started a spin-off series starring the female character ‘Roodhaar’, for which the scripts are provided by none other than ‘Conan the Barbarian’ writer Roy Thomas.